All About Missouri’s State Bird 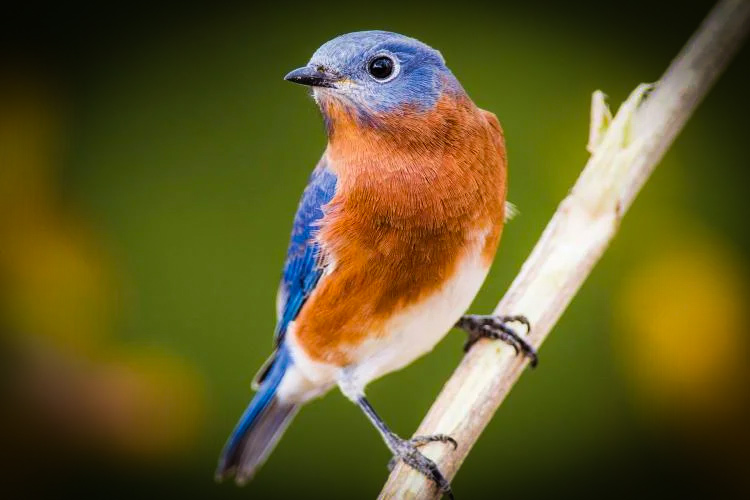 All About Missouri’s State Bird with MoConservation and my724outdoors.com!

The eastern bluebird is a small thrush with a plump body and short, straight bill. Upperparts are bright blue in the male, gray-blue in the female. Underparts of both sexes are rusty on throat, breast, and sides, with white on the belly and under the tail feathers. The female is paler below. Song is a blurry whistled series of notes, which some people translate as “Cheer cheerful charmer.” Call is chuiree, with a soft descent but rising near the end.

Similar species: Though they are also blue, indigo buntings are not thrushes, they are in the cardinal family; they are smaller and have conical bills; the males are all blue (though they can look blackish in poor light) and don’t have rusty or white anywhere. Blue grosbeaks are closely related to indigo buntings but are chunky birds with very large, triangular, silvery bills; males are blue with two rusty wing bars; underparts are blue with no white or rust. Another member of the cardinal family, the lazuli bunting, is very rarely seen in western Missouri; males have an orangish breast and white belly, similar to male eastern bluebirds, but they also have two white wingbars, conical bills, and are more turquoise-tinted.Size

In summer, Missouri’s State Bird are commonly seen in grasslands with scattered trees, farmland, and backyards in rural areas. Populations declined in the last century due to habitat loss, pesticides, and competition with aggressive nonnative species (house sparrows and European starlings). Conservationists rescued the species in large part by a widespread effort to erect and protect special bluebird nest boxes. Competition remains a concern, however.

Wild fruits are a favorite food of eastern bluebirds, including wild grapes, deciduous holly, and even poison ivy fruits. When there are nestlings to be fed, the birds forage instead for insects, which provide more protein for the growing young. Bluebirds forage by watching on perches for insects and flying down to pick them up or catch them in the air.

As a summer resident, common statewide; as a winter resident, uncommon in the south and rare in the north.

Missouri’s State Bird begin arriving at their breeding locations in our state in March and April and migrate back south in October and November. They are cavity nesters, laying eggs in a hollowed-out cavity in a tree created by some other animal, such as a woodpecker. Competition of such sites has led people to construct nest boxes that fit the bluebird’s requirements. There are usually 2–7 eggs in a clutch, and 2 broods per season.

All About Missouri's State Bird with MoConservation and my724outdoors.com!conservationMissourimoconservationAll Posts, Conservation, Missouri