Close Call with a BIG Rattlesnake 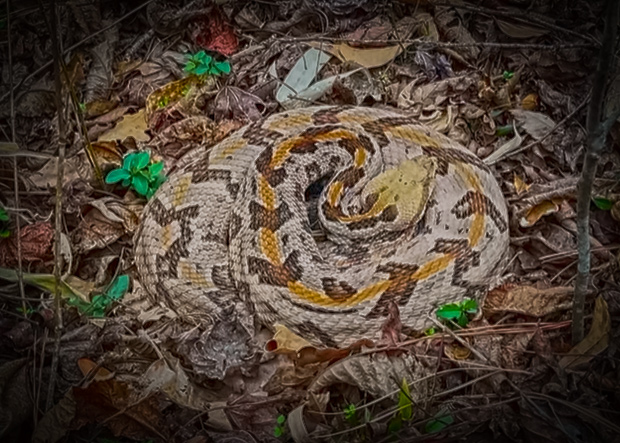 Close Call with a BIG Rattlesnake with NKFherping and my724outdoors.com!

YOU GOTTA SEE THIS ONE! A close call with a big Rattlesnake during a morning hike. Finally, a warm day! The snakes were loving it, and I saw good numbers and some of our big target species!

Rattlesnakes are a group of venomous snakes of the genera Crotalus and Sistrurus[1] of the subfamily Crotalinae (the pit vipers). All rattlesnakes are vipers. The scientific name Crotalus is derived from the Greek κρόταλον, meaning “castanet“.[2] The name Sistrurus is the Latinized form of the Greek word for “tail rattler” (Σείστρουρος, seistrouros) and shares its root with the ancient Egyptian musical instrument the sistrum, a type of rattle.[3] The 36 known species of rattlesnakes have between 65 and 70 subspecies,[4] all native to the Americas, ranging from southern Alberta, Saskatchewan, and southern British Columbia in Canada to central Argentina. The largest rattlesnake, the eastern diamondback, can measure up to 8 ft (2.4 m) in length.[5] Rattlesnakes are predators that live in a wide array of habitats, hunting small animals such as birds and rodents.

Rattlesnakes receive their name from the rattle located at the end of their tails, which makes a loud rattling noise when vibrated that deters predators or serves as a warning to passers-by.[6] However, rattlesnakes fall prey to hawks, weasels, king snakes, and a variety of other species. Rattlesnakes are heavily preyed upon as neonates, while they are still weak and immature. Large numbers of rattlesnakes are killed by humans. Rattlesnake populations in many areas are severely threatened by habitat destruction, poaching, and extermination campaigns.

Rattlesnakes are the leading contributor to snakebite injuries in North America, but rarely bite unless provoked or threatened; if treated promptly, the bites are seldom fatal.

Close Call with a BIG Rattlesnake with NKFherping and my724outdoors.com!conservationGeorgiaNKFherpingAll Posts, Conservation, Georgia