The Home of the Boggy Creek Monster 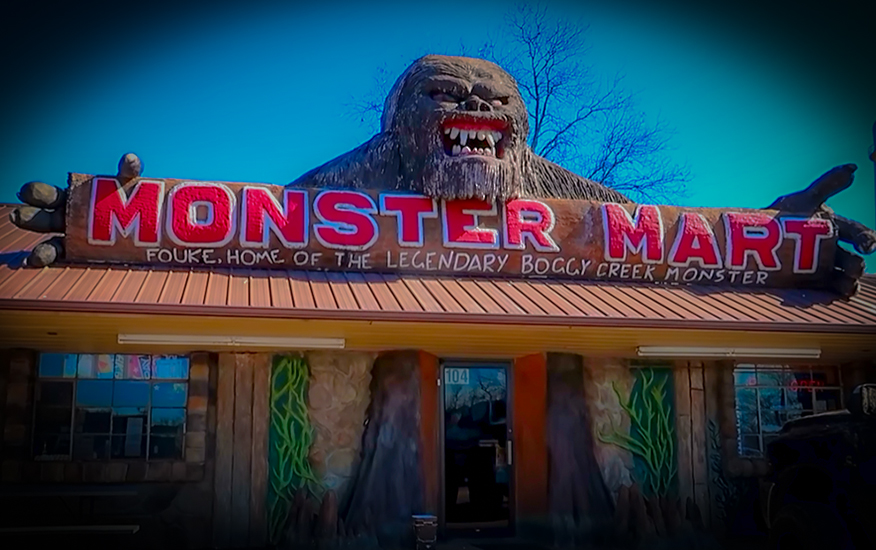 The Home of the Boggy Creek Monster with The Carpetbagger and my724outdoors.com!

Ever since 1972, the Boggy Creek Monster, has been synonymous with Fouke Arkansas. Just south of Texarkana, Fouke sits in the Sulpher river valley, home to the Legend of the Bogy Creek Monster.

The Legend of Boggy Creek is a 1972 American docudrama horror film about the “Fouke Monster“, a Bigfoot-type creature that reportedly has been seen in and around Fouke, Arkansas since the 1940s. The film mixes staged interviews with some local residents who claim to have encountered the creature, along with reenactments of encounters. The film’s director and producer, Charles B. Pierce, was an advertising salesman who convinced a local trucking company to invest in the film and hired locals (mainly high school students) to help complete it.

The Boggy Creek Monster, or as he is know around here, the Fouke Monster, is well known and the town has embraced the legend with many attractions themed around the docu-drama from 1972.

The mayor of Fouke recently made a declaration deeming Fouke the Bigfoot Capital of Arkansas.

The small town, located in the southwest corner of the state, is well known for the Fouke Monster of The Legend of Boggy Creek fame.

The report of sightings of a Bigfoot type monster in Fouke led to the documentary-style film by Texarkana native Charles Pierce in the early 1970s. The film assured legendary status for the Bigfoot look-alike. The Fouke legend continued to spread beyond the original film via two sequels featuring the 7-foot-tall, ape-like creature that supposedly haunts the swampy Sulphur River bottoms of Miller County, south of Texarkana.

Even if you don’t end up spotting the legend for yourself while in town, you don’t have to leave empty-handed. Located at 104 Highway 71 is the Monster Mart. This mart, which is located around two miles from the legendary Boggy Creek, is a convenience store/gas station with a twist. Here you can buy Fouke Monster/ Bigfoot memorabilia and also learn more about the creature and the famous films in a small museum that can be found there. Right next to the Monster Mart is also a spot to grab a bite to eat at aptly called the Boggy Creek Cafe.

ArkansasThe carpetbaggerThe Home of the Boggy Creek Monster with The Carpetbagger and my724outdoors.com!travelAll Posts, Arkansas, Travel