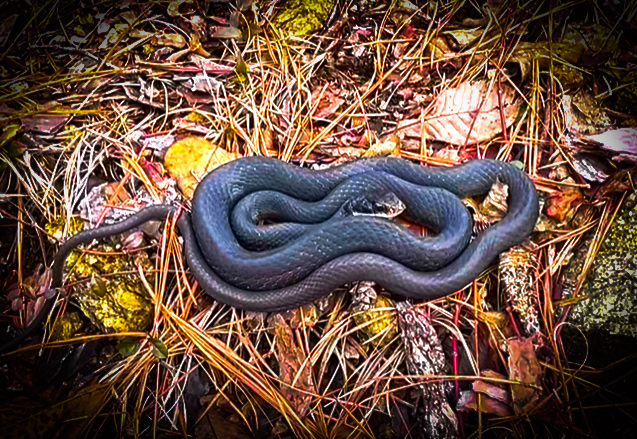 A warm start to the year provided a rare opportunity to get outside on the first day of the New Year to do some snake hunting!

Snakes are common across Georgia, even in urban and suburban areas. As development and population growth continue in Georgia, encounters between humans and snakes will increase.

Snakes are economically beneficial because they eat rats, mice, and other animals deemed to be pests. Some snakes have been used as bioindicators to assess pollutants in terrestrial or aquatic ecosystems.

Georgia is fortunate to have among the highest biodiversity of snakes in the United States with 46 species. Snakes can be found from the mountains of northern Georgia to the barrier islands along the Atlantic coast. The rich diversity of snake species makes Georgia ideal for observing and learning about snakes.

According to the National Wildlife Federation, at least 20 percent of the U.S. population suffers some degree of snake fear. Regardless of the cause, extreme fear is unnecessary. Snakes are not under every rock or behind every tree; encounters are relatively infrequent. Typically, the more people learn about snakes, the less they fear them. By learning about species identification and distribution as well as the fascinating natural history of these reptiles, you will greatly reduce your fear of Georgia’s snakes and enjoy the outdoors more.

Simply hearing the word snake sends shivers up some folk’s spine. However, snakes are an important component of our ecosystem in Georgia because of their major role as both a predator and prey. Snakes are economically beneficially because they eat rats, mice, and other animals deemed to be pests. Some snakes have been used as bioindicators to assess pollutants in terrestrial or aquatic ecosystems. Unfortunately, many species of snakes are declining as a result of human activities. Thankfully, of the 46 snake species that occur in Georgia, only two are considered legally threatened, the eastern indigo snake and the southern hognose snake.